Please note that Camp Wyanokie is considered a "rustic camping area." We are NOT able to accommodate RV's and we do not offer ANY campsites with running water, toilets, electricity or WiFi. Just 150 pristine acres of woodlands, a 5 acre lake, and hiking trails. We do have two latrines/outhouses, as well as fire pits and charcoal grills.

Gifted to the towns of Caldwell, Fairfield, North Caldwell, Roseland and West Caldwell for use by residents, Camp Wyanokie is a place of beauty, serenity and isolation. Camp Wyanokie has been enjoyed by West Essex area campers, hikers and picnickers since the property was first purchased in 1919 by a group of local campers. Ownership was deeded to the five towns in 1972, making Camp Wyanokie a community commitment to the preservation of open space. Tax- free status was approved for the property on appeal in 1988, so operating costs to the owner towns are minimal. Camp Wyanokie is administered by a Commission comprised of appointed representatives from each of the five owner towns with a Management Committee that includes trustees of the Camp Wyanokie Association.

Set in 150 acres of forest at the edge of Norvin Green State Forest, the camp surrounds a sparkling five acre lake. In all seasons, Camp Wyanokie is an ecological wonderland, offering an opportunity to relax and enjoy nature at its best. Explore the lake shores and streams for tadpoles, salamanders and sunnies. Take a walk around the lake to birdwatch or identify animal tracks and plant species. The forest begins as you approach the camp area on Snake Den Road, a narrow gravel road which, however, is township-maintained to serve a few residences in the area. 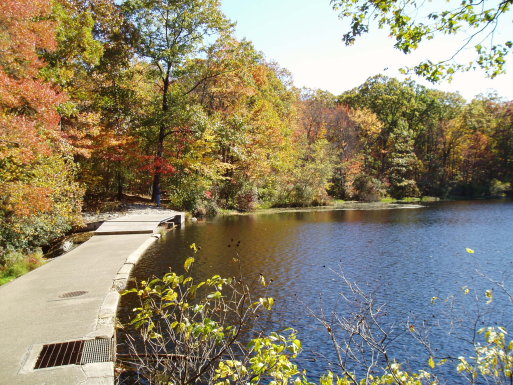 Gifted to the residents of: